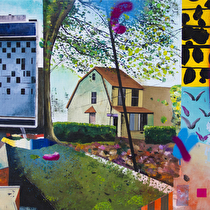 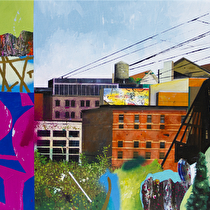 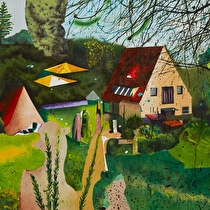 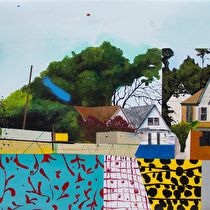 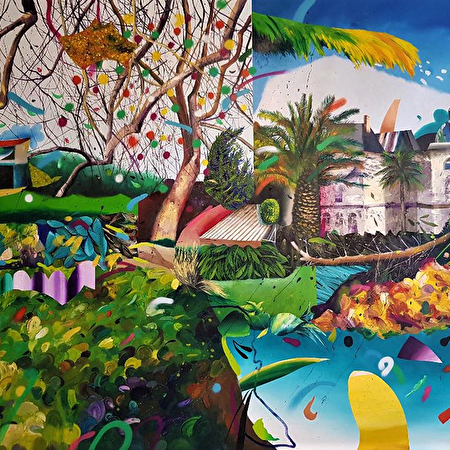 A Kind of Jardin du Luxembourg.

Iulian Bisericaru's artworks explore the dissonances between the anthropic, architectural environment and the natural one. His paintings offer a neglected or hidden perspective on aspects of contemporary society, that the human eye willingly avoids. Ironic and playful at the same time, the artist demands the beholder to take a critical position towards environmental issues, be it by depicting the remains of industrial society or by approaching the controversial topic of city planning.

His latest series is inspired by the Parisian programme Parisculteurs that incentivises flat-owners to build green terraces and balconies in their living spaces.  Exploring this initiative during his residency at Cité internationale des arts, Iulian Bisericaru is interested in discovering the different tensions defined by the creation of landscape in concrete environments, slowly immersing into their shared space. The combination of colours, from undertones of grey, brick red, ochre, chrome to the nature green, vermilion and dark green feed the eye with juxtapositions of different images inspired by locations throughout Paris. A water-fountain loses itself into Rousseau-like vegetations, whereas the trees are simply freed by their roots into open-air surfaces of blue. We see a world of violent re-constructions breaking apart at the seams.

Iulian Bisericaru  (b. 1987) has graduated from the University of Arts and Design, the department of painting, Cluj-Napoca where he is also currently writing his PhD thesis, researching the links between architecture and painting. During February – May 2019 Iulian Bisericaru is attending the residency Cite des Artes, Paris. Two years earlier he took part in the International Summer Residency in Aschersleben and in 2009 Iulian Bisericaru received a scholarship from the Art Academy in Macerata, Italy. In 2012 he was nominated for Start point Price and he also won the Expomaraton Award. In 2017 his work "Diebenkorn background" was featured in the Italian journal La Lettura - Corriere dela Sera (July, 2017).