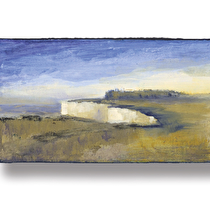 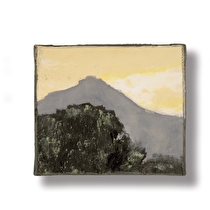 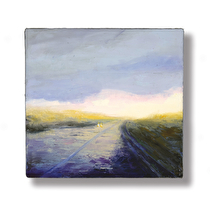 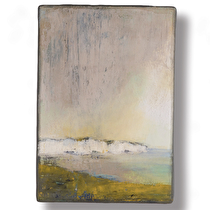 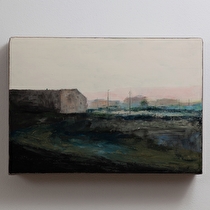 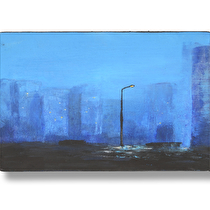 Among the most interesting representatives of the new landscape painting, Alessandra Rovelli chooses to move between the recognizability of figuration and the seduction of the abstract. Her pictorical material, coarse, rough, lumpy - product of a careful reworking of art history, from the most classical tradition to the avant-garde - describes images that lead us towards an archetypal and symbolic dimension of the countryside or the urban view, precisely because they are recognizable only up to a certain point. Always played out on a reduced chromatic scale - tones of white and grey to communicate winter atmosphere, the warm browns, the full range of blues or the soft sensuality of pinks - Rovelli's works tell of rarefied atmospheres, foggy, deserted, as if those places were caught in a time perhaps hostile to man, but in which nature finds its own wild freedom. But the artist’s symbolic play doesn’t end here. The most original and profoundly conceptual component of her search is found in the identification of support.

Those of Rovelli are not simple canvases, but, as she has dubbed them, life boxes, three-dimensional spaces where the canvas finds a structure in the cardboard box in which it is supported. A choice that not only gives the painting’s physical presence - in some ways sculptural - depth, but also opens up unprecedented conceptual paths. The "inside" of the support, in fact, becomes a treasure chest in which to imagine secret paths, hidden compartments where the same creation painted on the surface appears to us revealed and revealing. The awareness of a further level of reading pushes the mind to go even deeper into those roads that are lost to infinity, to imagine sudden curves that maybe we cannot see but that we "feel" contained in the dark secret of the life box. Meanwhile the urban view doesn’t end with the profile of the city, but promises to reveal itself, opening up its secrets. So here painting becomes a place where visions are reversed, space of the unsaid and pretext to open our subconscious to ourselves.